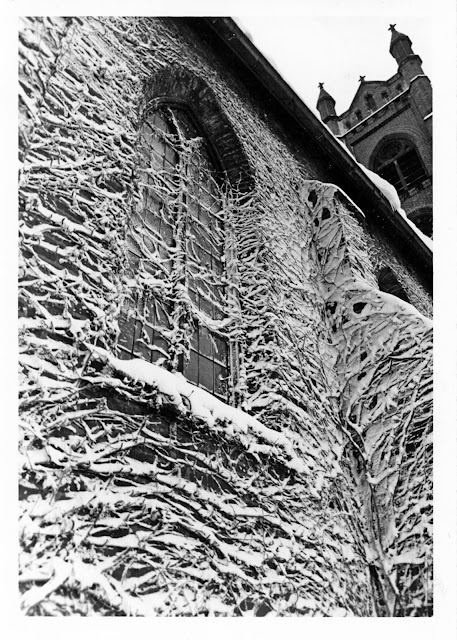 "SNOW PATTERNS. The fall of snow over the past weekend left sights galore in the village. Trees were outlined in white as the wind piled up snow on even the smallest branches. The vines on the First Congregational Church became so outlined as the snow clung to them providing a wraith-like appearance."

This lovely snow scene was captured in 1968 by photographer, Tom Bleich. It was published in The Romeo Observer on January 18 of the same year.

An Interview with Santa 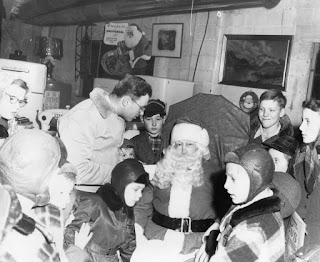 Local reporter, John Gingas, takes a few minutes of Santa's time to interview the jolly man before he returns to the North Pole to finish up his naughty and nice list. Santa wouldn't reveal his secrets but did allow the reporter to share some of the letters written by Romeo children.

Hundreds of children sat on the big man's lap at this local event to bend his ear with his or her hopes for Christmas gifts under the tree. Hopefully, wishes were granted, and wonderful Christmas memories were made.

Wishing you a joyous and safe holiday season

from the Romeo Community Archives

Did you know that originally Veterans Day was called Armistice Day? Armistice is another word for a truce, which occurred between the Germans and the Allies on the eleventh hour of the eleventh day of the eleventh month in 1918, effectively ending World War I. The day was recognized by Congress as the end of the war in 1926 and became an official holiday in 1938. After two more wars, World War II and the Korean War, the name was changed to Veterans Day in 1954 so that Americans could thank and honor all the men and women who have served.

Happy Halloween from the RCArchives! 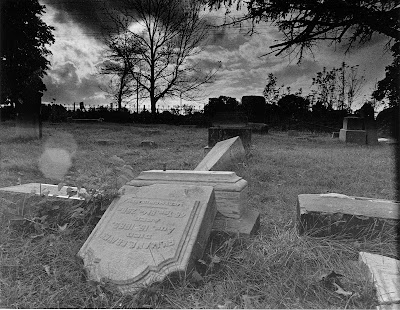 "It was toward dusk. The shadows were long, the sky dark and menacing rain when [photographer, Karen Hamilton] got to the cemetery. To get her shots she often crouches, lies on her stomach, stretches tall, and assumes some odd stances just to get the best angle. That's what she was doing in the cemetery when suddenly she felt a hand firmly fall on her shoulder. She leaped with fright and swung around to face whomever it was. Nobody. Nothing there. But she's certain of what she felt.

Even stranger is the fact that the writer [Elizabeth Kane Buzzelli], a few years ago, was doing a story on this same cemetery and encountered a figure all in black who seemed to be tending the graves. Back at the office she described the figure only to be told she was describing the old man who used to take care of the cemetery. 'But,' she was told, 'he's been dead for over a year.'"

What can you do for an Archives?

This is the last video in this series, thank you for watching!

The Romeo Community Archives would also like to thank the Friends of the Romeo District Library for their support and generous donation of used book sales for the month of October.

What can an Archives do for you?

What does an Archivist do?

What does an Archivist do?

Celebrating American Archives Month
Join us for one of our Open House Tours, from 10:00 am to 1:00 pm on:Saturday, October 19thSaturday, November 2ndAnd please stop in next week, October 21st, as we answer the question of "What does an Archives do for you?"
- October 14, 2019 No comments: